This is an interview article of Young-Ho Yoo, CEO of Fawoo Nanotech, which was introduced in Newsis on July 26, 2021.

<Contents of the Article>

More than 100 "patent rich" CEO Yoo, who has pursued a paradigm shift,

"There should be more than making money... I would like to die after a lavish life."

"No matter how hard it is, you have to do what others don't do."

This is the most important part when Young-Ho Yoo, CEO of Fawoo Nanotech, who swept the world with "Lumisheet" of LED panels in Korea, challenges new businesses.

Lumisheet was the most successful product that gave CEO Yoo numerous honors, including acquiring patents from 36 countries ▲ exporting to more than 60 countries ▲ establishing subsidiaries in 7 countries ▲ 'USD 30 million export' award, etc, but it was sold to Dongbu Group in 2011 as it faced a business crisis.

While hygiene has emerged as a major topic worldwide due to the spread of COVID-19 and climate change, CEO Yoo is taking a new leap forward with his unique technology to mass-produce "nanobubble" (ultra-fine bubble).

In an interview with Newsis on the 26th, CEO Yoo said, "It is a product that is confident enough to market that customers will use the product for a month and give a full refund if it doesn't work."

Nanobubble is an ultra-fine bubble that exists in water and is highly expandable to various fields such as health, medical care, environment, energy, food and bio. Although it has only been generating microbubble, which is 1,000 times larger than nanobubble, in Japan and Korea, Fawoo Nanotech has created nanobubble generators for mass-production based on "surface friction method," the world's 1st patented technology.

"In order to make nanobubble, all companies have only tried high-pressure injection or multistage pump mixing method, but we realized that these two methods were impossible earlier and tried a new method," CEO Yoo said. "The idea was that there will be a reaction to avoid pressure like a solid when fluid is under pressure."

This time, Fawoo Nanotech's "NanoGen" shower generates up to 500 million nanobubbles with an average size of 95 nano-meter per 1cc. In March, it was confirmed by the Korea Testing & Research Institute (KTR), a national accredited institution, that it helps prevent and improve skin and scalp troubles.

Previously last year, it released 'Nanobubble Ozone Water' that maximizes sterilization by applying nanobubble production technology to ozone water. CEO Yoo plans to focus on exporting nanobubble ozone water to developing countries such as India and Africa and countries with serious water pollution problems such as China and Mongolia in the future. Many years of export experience and know-how through Lumisheet and others are the strengths of CEO Yoo.

"If you put ozone in the nanobubble, the reaction power becomes thousands of times stronger." CEO Yoo said. "The deeper it goes, the higher the concentration, which can drastically reduce the steps of the existing purification system for lakes, pig barns, etc. In addition, there are endless applications such as areas that require living prevention and various eco-friendly industries." 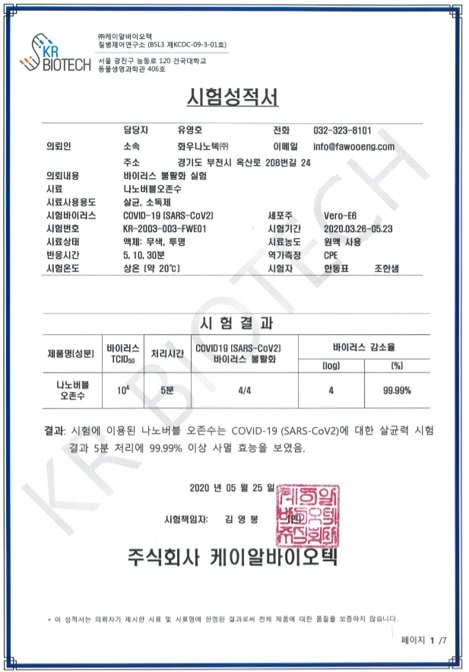 The most affectionate invention of CEO Yoo, who owns more than 100 patents, is unexpectedly a 'Computer Numerical Control (CNC) machine', not a global hit 'Lumisheet.'

CNC machine is a technology that CEO Yoo learned and developed as if he were "heading to bare ground" by disassembling, cutting, assembling and designing machines directly from processing companies near Cheonggyecheon Stream in the early days of his foundation. It is also a fundamental technology that was able to produce follow-up works such as Lumisheet and nanobubble generators.

Looking back on CEO Yoo's 30 years of business life, he has pursued a paradigm shift without fail. The CNC machine, developed by CEO Yoo, has secured an exclusive status (more than 70% share) in Korea by changing the machine that used plastic at that time to use iron and improving control.

Lumisheet, which introduced LEDs on electronic displays, were also a rare change of thought at the time. The LED project, which caused him to suffer from "failure," was also pushed under the big picture of securing "carbon emission rights," which is still a big topic. However, it faced an unexpected headwind of the Lehman crisis at the time.

CEO Yoo advised junior businessmen that "they should have more goals than making money." What you just do for a living is that it doesn't last long. He also said he had to 'enjoy' working. He says that there is nothing wrong with the old saying that hard-working people can't follow smart people, and smart people can't follow people enjoy.

He said his ultimate goal in life was "to die after a glamorous life." He said he wants to die after an unrepentant life. In the past, he also had a dream of creating a school that produced great politicians with love for the people. His values are in line with the meaning of Fawoo, which means "making the universe mild." 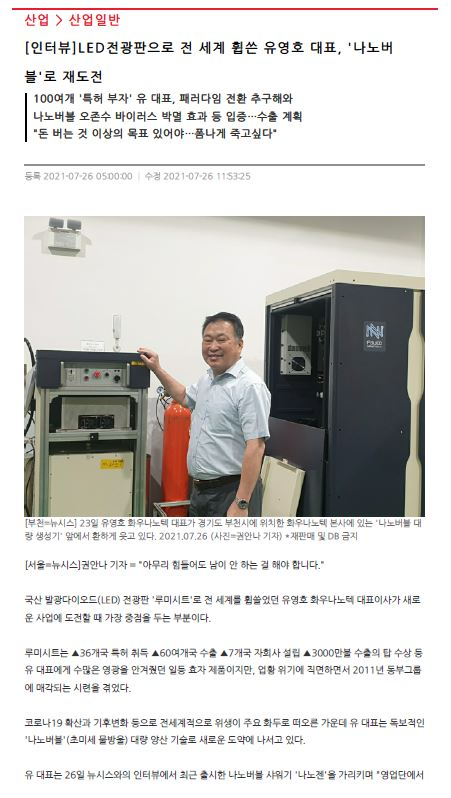 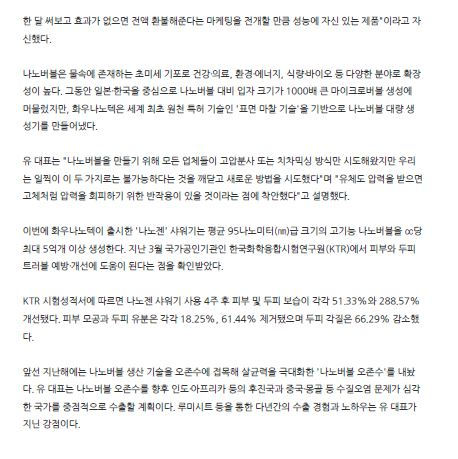 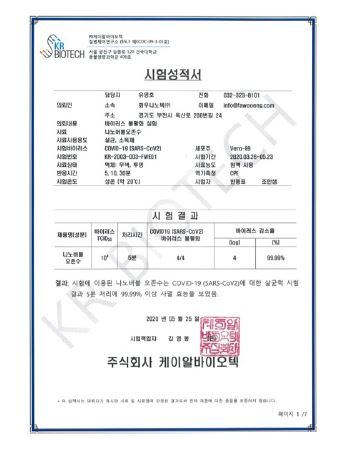 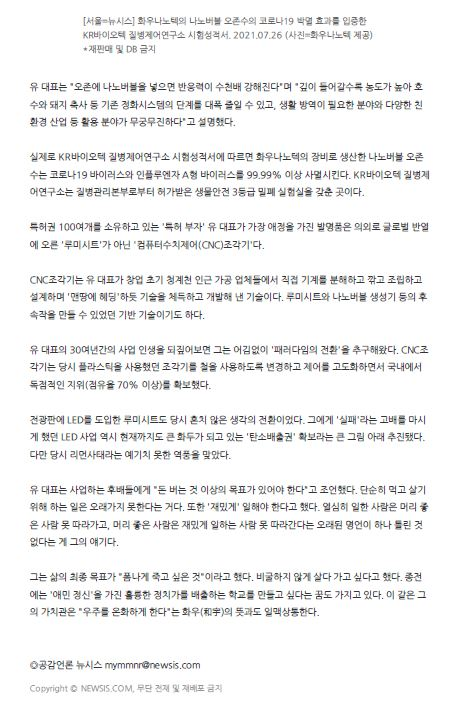 This is an article about the launch of our nanobubble shower, NanoGen, which was reported in the Maeil Economic Daily on June 30th, 2021.

<Contents of the Article>

"Shower that helps scalp health with ultra-fine bubbles has been released."

Penetration into pores and removal of ultra-fine dust

Moisturize skin and scalp after 4 weeks of use

Effect on prevention and improvement of scalp trouble

Drain out in combination with oil and impurities in pores

Fawoo Nanotech, Korea's only company specializing in nanobubble (ultra-fine bubble) generators, has launched the industry's 1st "NanoGen" shower that produces up to 500 million nanobubbles per 1cc with an average size of 95 nano-meter.

According to Fawoo Nanotech on the 30th, nanobubble, which is generated through 'NanoGen' shower, penetrates into human pores and easily removes ultra-fine dust, which causes various skin diseases. Nanobubble became known in the 1990s when Dr. Takahashi of Japan discovered that microbubble existed in the water. Since then, the development of nanobubble generators has been attempted mainly in Japan and Korea, but the effect of nanobubble has not been utilized because it has only produced microbubble, which is 1000 times larger than nanobubble. Fawoo Nanotech recently developed nanobubble generators and opened the door to utilizing nanobubble.

"Because nanobubble is 1/500 smaller than normal pore size, it can easily penetrate into pores. So, it is excellent in combination with oil and impurities in pores to discharge them out. And, it smoothly delivers fine moisture particles to pores and the inside of the epidermis, so it is also excellent for moisturizing the scalp and skin." an official from Fawoo Nanotech explained.

In March, Fawoo Nanotech conducted clinical trials at the Korea Testing & Research Institute (KTR), a national accredited institution, such as effect of improving skin moisture content, skin oil, dead skin cells, skin texture (roughness), skin pores and scalp cleaning power (moisture, oil and dead skin cells in the scalp) before and after using the NanoGen shower. As a result, skin and scalp moisturization improved by 51.33% and 288.57%, respectively, 4 weeks after using the NanoGen shower. In addition, 68.46% of skin oil was removed, 35.02% of skin dead skin cells were reduced and 22.18% of skin texture was improved. Skin pores and scalp oil were removed 18.25% and 61.44% respectively, while scalp dead skin cells decreased 66.29%. This shower has proven to help prevent and improve skin and scalp troubles. Also, according to the cleaning power test result requested by the Korea Apparel Testing ＆ Research Institute (KATRI), nanobubble water generated by the NanoGen shower is has been recognized that using only one-fifth of the existing detergent has an equivalent cleaning effect.

"Nanobubble Shower is a groundbreaking product compared to other products that use microbubble, and we are working hard to develop products in general water supply fields such as sinks and baths, as well as specialized water supply markets such as kitchens, water purifiers, and pet washing machines," said Young-Ho Yoo, CEO of Fawoo Nanotech. He added, "We are planning to carry out projects in various fields such as food, bio, health, medical, environment and energy with nanobubble." 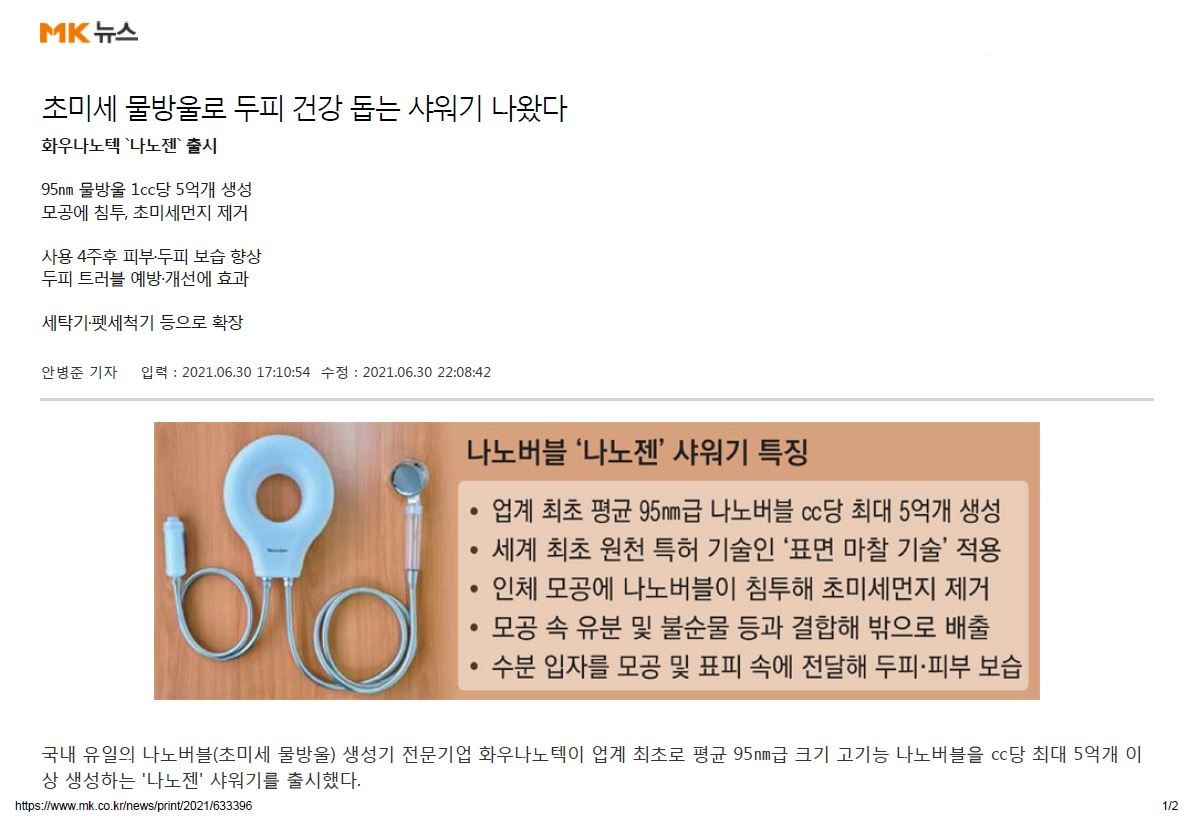 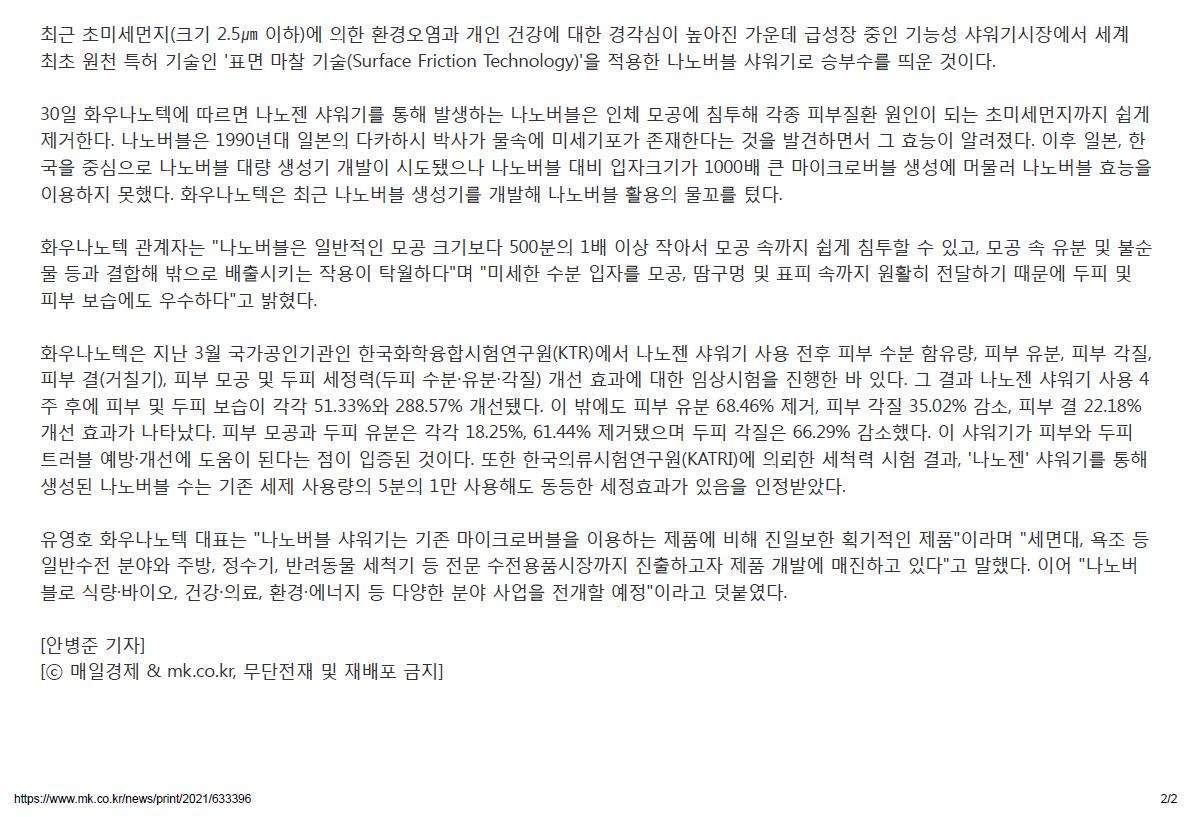 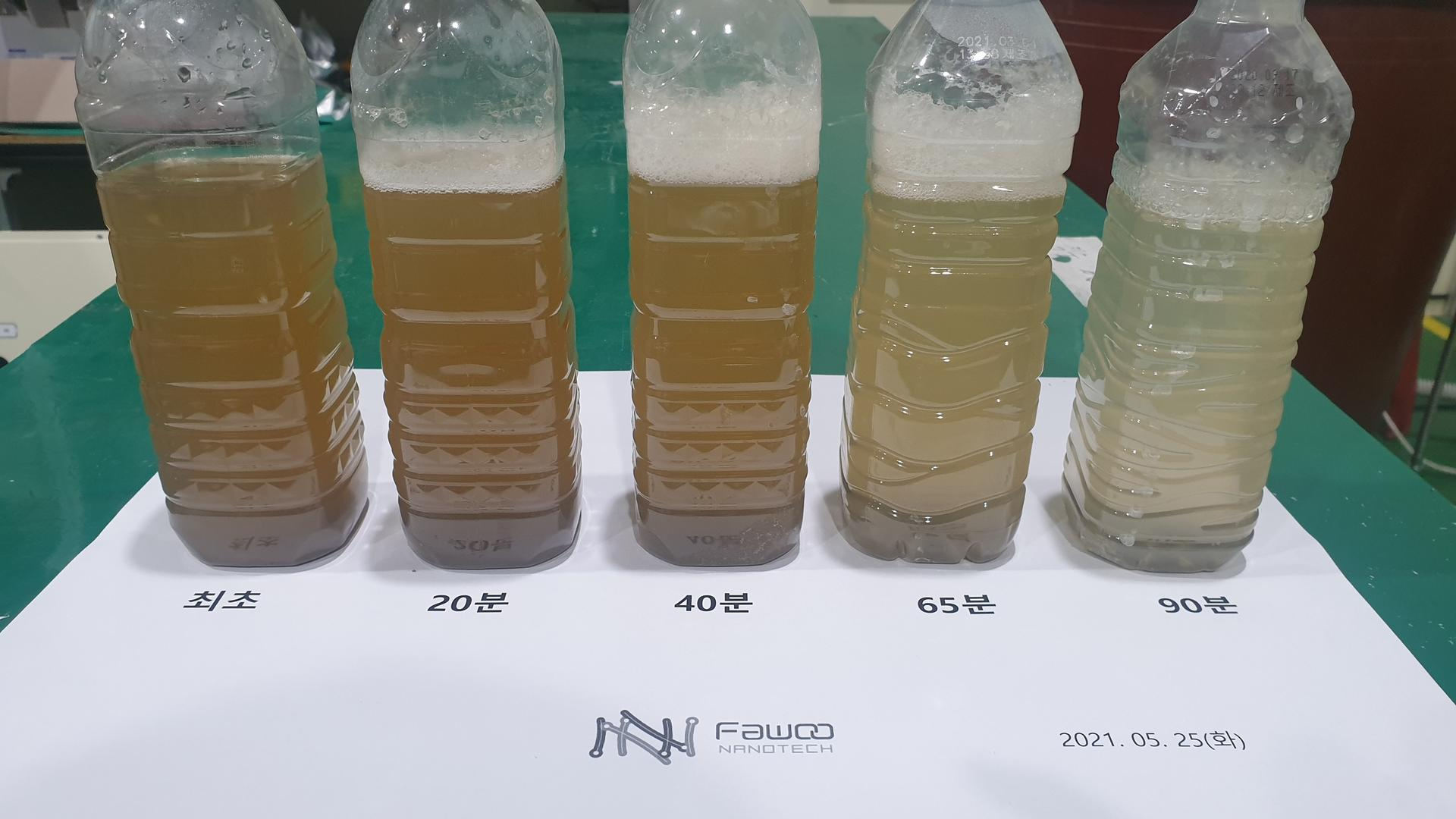 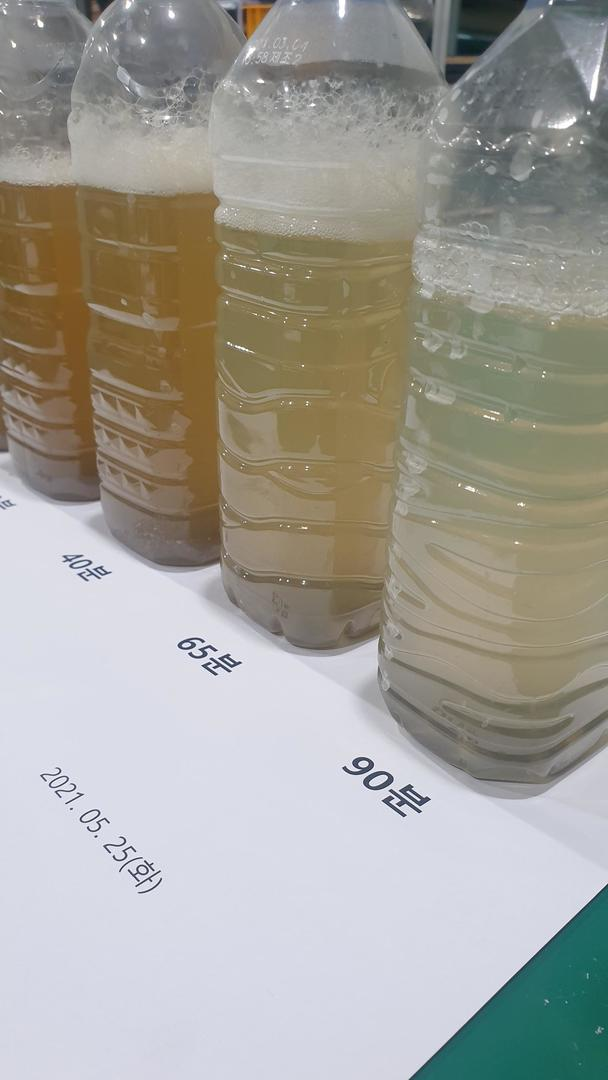 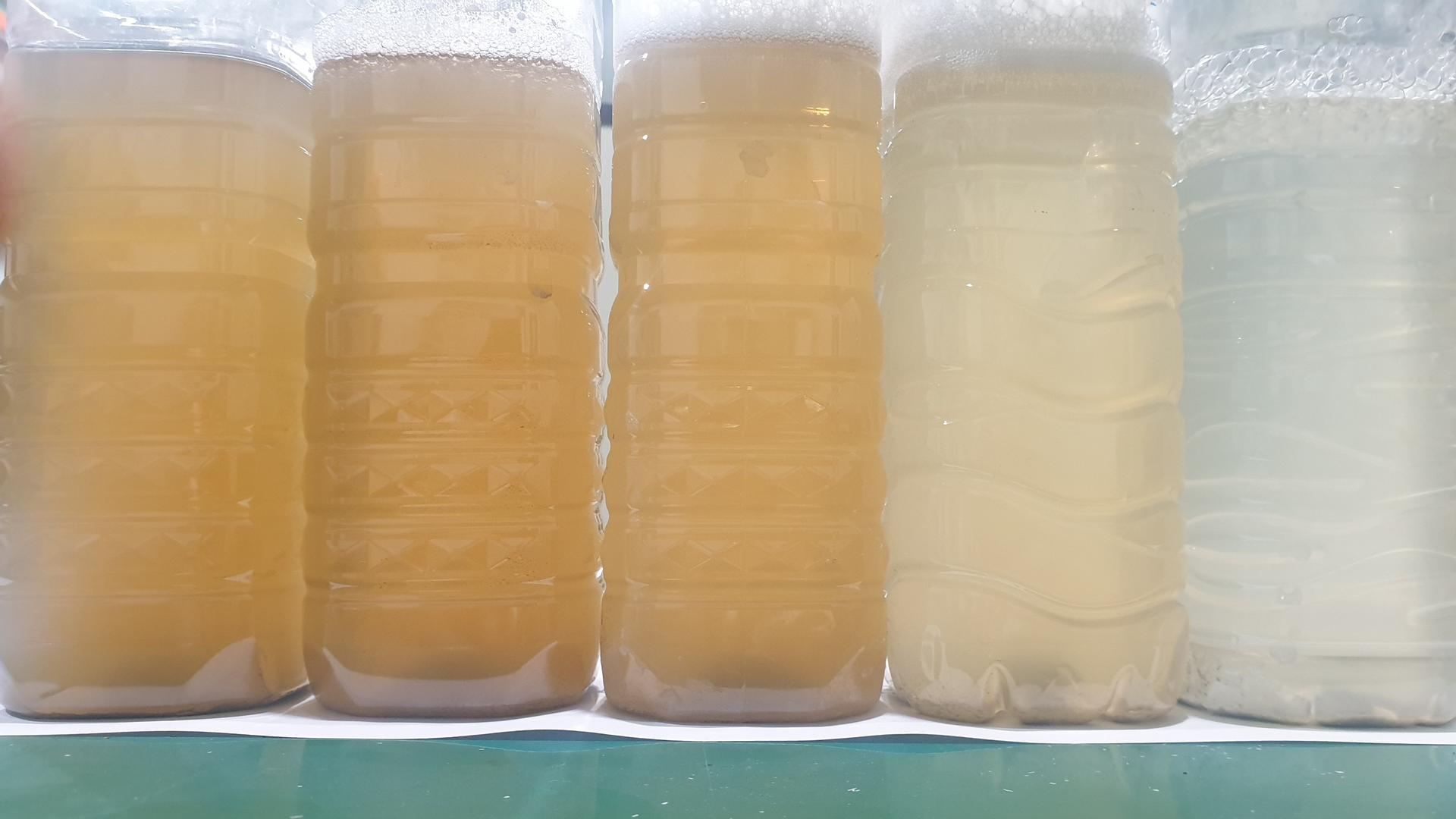 - Large amount of foam is generated within 3 minutes of operation

- Remove foam from time to time

- Instead, foam generated 60 minutes after the water began to clear, and the particles became larger and subsided faster.

This is a report on cleaning, deodorization and sterilization test results using NanoGen shower and shower hose.

This is a report on skin and hair test results using NanoGen shower. 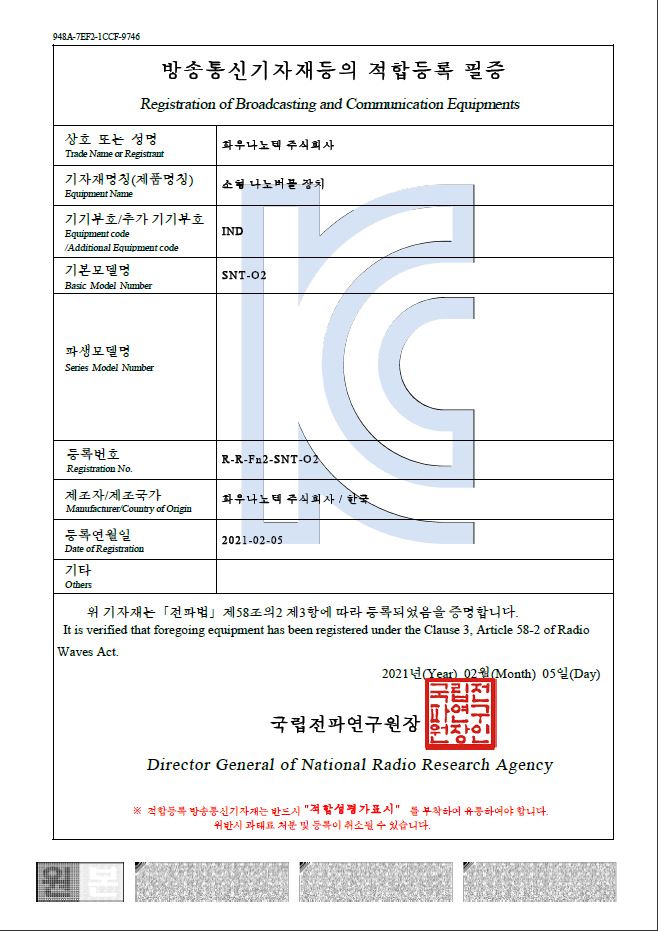 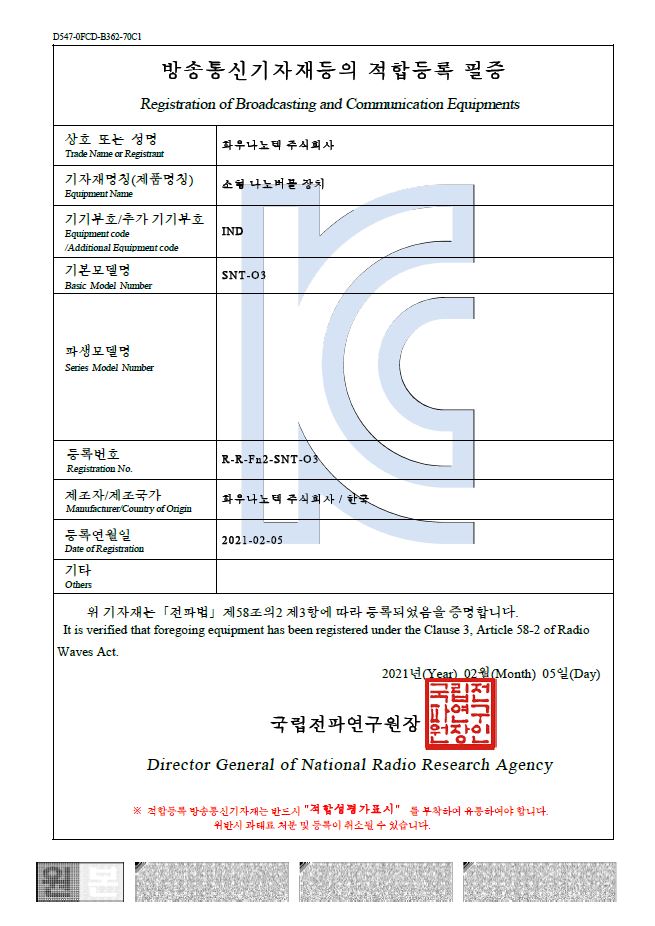 It will be aired 965 times (average 320 times a month) in 13 time zones, so please listen to it and promote it around you.

The Venture Company Confirmation is attached as below.